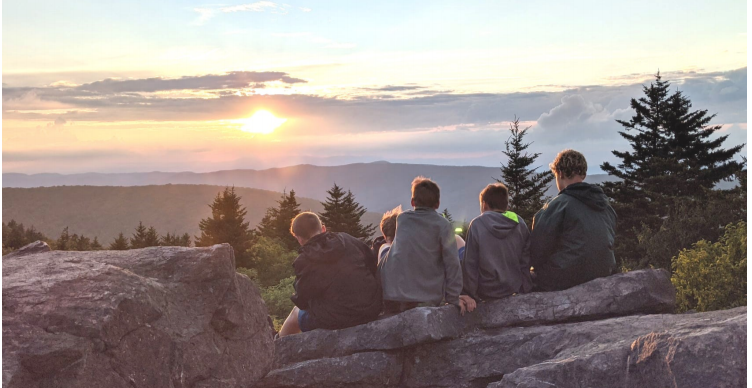 We had to cancel many of our events this summer because of Covid-19 restrictions. However, our junior high boys outdoor Kairos Fellowship trips were able to proceed; praise the Lord! We hear this month from one of the dads who served as staff for a Virginia trip, Joseph Fountain.

“On the first day hitting the trail we, a group of dads, Kairos staff, and junior high boys, headed up the mountain in a downpour,” Joseph reports. “After just a few steps everyone could tell this was the start of something epic! The rain came down and the trail became a river of running water over our boots, but the great attitudes of the boys and staff were a glimpse at a group of guys who came prepared for an adventure.

“The rain let up when we arrived several miles later at our first camp (the rain stopping or starting just in time would be a sign of the Lord’s favor and grace on us for the rest of the week). We were greeted right away by the friendly wild ponies at our camp, and several were quickly adopted and given names, depending on their attitude or varied coats of hair. ‘Cinnamon’ was a light brownish pony that seemed to always be smiling, and ‘Killer Bangs’ had a bit of a mullet and an attitude to match. The boys found a couple pregnant ponies and began naming the future babies; one lucky mare even had her mane braided! 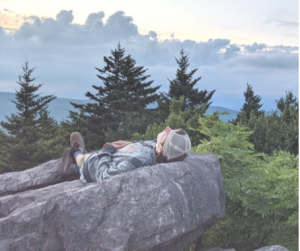 “We made our way further into the mountains, climbing boulders and navigating the scree (a mass of small loose stones that cover a slope on a mountain) that seemed to be just about everywhere on the trail. The views of the mountains on the Appalachian trail are breathtaking; the peaks are covered in a mix of evergreen trees, birch, and other lush, green summer plants. Along the trails we were able to find blueberries and blackberries in abundance and we even found some chanterelle mushrooms to add to our camp dinners.

“We came to a camp that was full of ponies and longhorn cattle and had to be on the watch, since the ponies were mischievous and inquisitive about our gear and food. We continued to our third camp that was deeper in the mountains and was a more forested site. The rain came again just in time for a mid-afternoon nap, and we enjoyed our time around the campfire listening to stories and sharing about the day. We had an epic prayer time on gigantic, ancient boulders that were right in camp.

“In the morning before lunch, we set out from camp to have   silent meditations for the few-miles hike. I felt led to meditate on patience and living in the Holy Spirit, both great meditations for me as I dealt wit 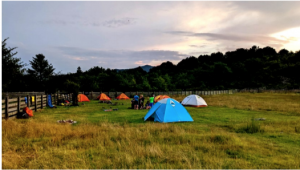 h the aches and pains of hiking in the mountains with a large backpack! I experienced the Lord being present in this time in a special way. I found extra energy and joy. I had a few moments of amusement while watching some of the boys as they hiked along, each in his own way: some running ahead and passing all of their brothers, others taking longer and struggling with the climb, but with good attitudes and keeping silent as we reflected together on Romans, chapter 8.

“We hiked to a huge grassy field on a mountainside with panoramic views of mountain vistas and valleys. From that camp we were able to take a refreshing swim in a mountain stream. Then the men watched the sunset while the boys struggled to make a 10-man pyramid. We believed they must have been successful if the whoops and hollers were any indication.

“There were many, many other great views, stories, and experiences, and through it all the Lord was clearly with us. I saw the Lord’s presence in our staff, in our health and relating, in our transportation, and in our short stays at the 4h camp before and after the trip.

“As a dad, I was proud of my son and the other boys that were on the trip; they were resilient and joyful through it all. I was grateful for the other dads that came along, and I grew closer to them and the Kairos staff after sharing stories of our vocations and testimonies of coming to Christ. The men of the Kairos Fellowship staff were great servants and leaders, and we could not have made it without them.”

We are incredibly grateful to Joseph and the other dads and volunteers that serve on staff and make these trips possible. Thanks also to you, our supporters, who by your prayers and financial gifts make it possible for us to offer these great adventures for our young teens. May our Lord greatly bless you in the months ahead.

Your brother in Jesus Christ,